Traditions. All families have them, and they help keep memories of the past alive. Traditions come in many forms, and start when something is done the same way, or at the same time from year to year; from generation to generation. They almost always provide a connection to a person or place, but can also provide a connection to a season or holiday.

One of the traditions that my children looked forward to at this time of year was receiving an advent calendar from my mother-in-law; one of the pre-printed cards with a piece of chocolate behind each door. It marked the beginning of the Christmas season for them, and it was an exciting way to count down the days until Christmas. The fact that they also got to eat a piece of chocolate for 24 straight days in a row didn’t hurt either! For my daughter, it held even more meaning, as not only did the calendar count down the days until Christmas;  it also counted down the days until her birthday. The first thing she would do when she received her calendar was to look for the door on her birthday.

Sadly, my mother-in-law passed away in September, and it didn’t occur to me until I read this blog post that my kids weren’t going to get an advent calendar from her going forward. I wasn’t about to let this tradition end, so I decided right then and there that I was going to make an advent calendar for both my son and daughter. Now, I can hear you saying that I could have just bought a pre-printed calendar for each of them, and you’re right, I could have. But making things is what I do, and can do, and, besides, the time and care I put in to these calendars will be a nice tribute to my Mother-in-law”s memory.

There are so many different and creative ways to make an advent calendar–from using a mini muffin tin to creating a banner. The sky is the limit, and it took quite a bit of time to research all of my options. I ended up circling back around to the calendar made in the above highlighted blog post, however–it really appealed to me. I loved the chalkboard frame, the take-out boxes arranged into a tree shape, the buffalo check pattern on the boxes, and the overall simple, rustic charm of the finished project. With a few modifications, I knew it would appeal to my kids as well.

Here’s where the non-traditional colors come in. The first modification I made was to  the color choices for the tree. Instead of a traditional brown and green tree, I decided to make my trees gray and cream. The second modification I made was using cardstock for the top box instead of using glittered paper. I would then use matching glittered paper for the stars scattered around the tree. I had three cardstock colors that had matching glittered paper, so I let my kids decide what color they wanted for their top box. Here is the picture I sent them, which shows the gray and cream tree plus the three color choices for the top box:

Here is another view showing the buffalo check pattern on the boxes:

My daughter wanted a red tree topper, and my son wanted a green one. With their choices made, I could now focus on how I was going to number the boxes and finish off the top of the frame.

This is a picture of my daughter’s calendar laid out on the frame, and you can see that I cut the numbers out of gray cardstock and adhered them to a vellum star, which, in turn, got attached to the top flap of each box. I numbered my calendar from bottom to top because I wanted the colored cardstock box to be for December 24th. There is no right or wrong in paper crafting, so you could easily switch the numbering from top to bottom, if that is your preference. For the design at the top of the frame, I started with a larger star cut from vellum cardstock, and then I layered the word December and some glittered snowflakes on top of it.

This is a close-up of the top of the frame. 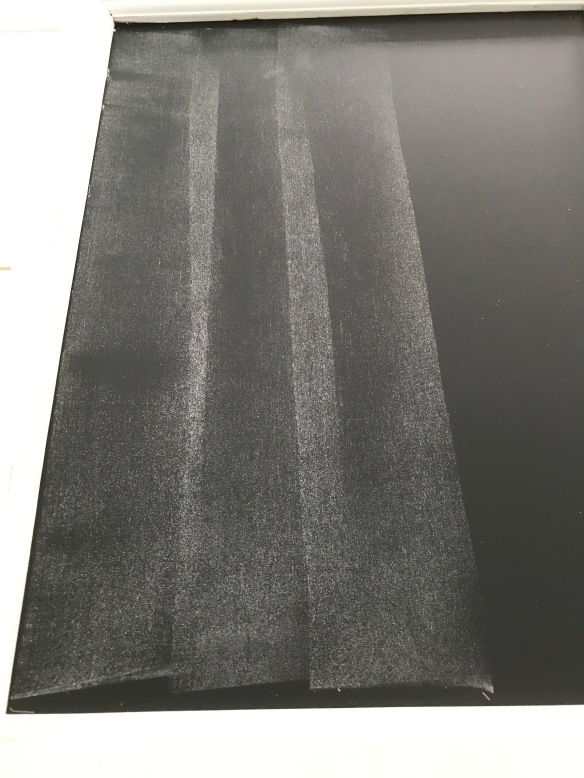 When you’ve covered the entire chalk area, then just wipe down the area with a dry cloth.

The chalkboard on the left is new, and the one on the right has been seasoned. It may be a subtle, but the seasoning softened the chalk area and I like how much better it looks. 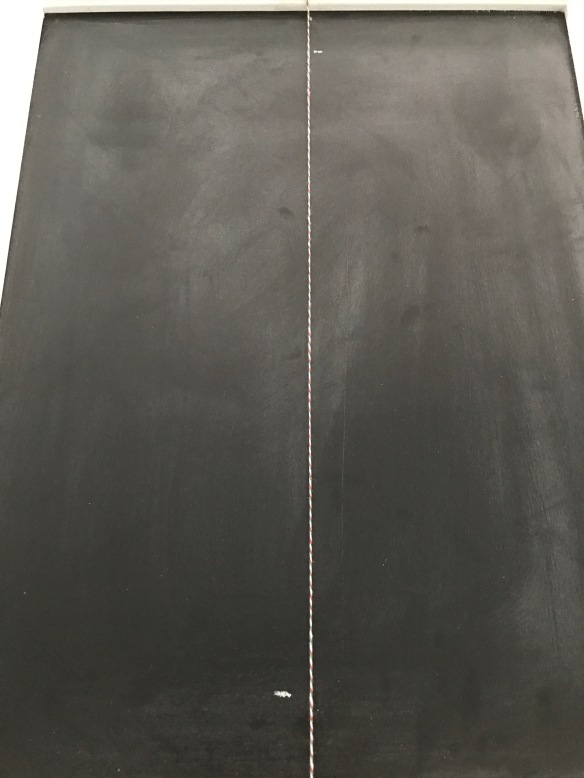 Since I only get one chance to glue everything onto the chalkboard, I took the time to mark the middle of the area with twine, and also made chalk marks where the top edge of the top box should be, as well as where the bottom edge of where the bottom box should be. I had my hot glue gun heating up while I was marking the frames.

I figured out that if I adhered boxes 2, 3, 6, & 7 down first, the layout should remain straight and adding in the additional boxes should go fairly smoothly. I also adhered the vellum star on to the top of the frame before I removed the twine to ensure that it was in the middle. 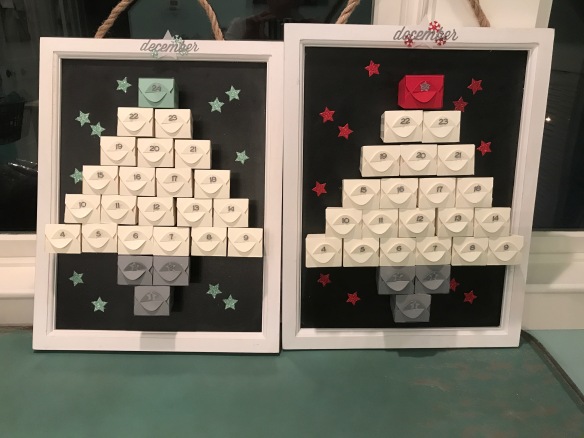 Drum roll please….here are the completed calendars, and they turned out even better than what I had pictured in my mind. The color scheme is fresh and modern, and by having used cream cardstock for the body of the tree, the top box and the stars really stand out. I couldn’t be happier, and I was excited to be able to give these to my kids over Thanksgiving.

Below are additional pictures I took of each calendar separately, and then a side view to see the buffalo check pattern again:

and my son’s calendar.

Another look at the buffalo check pattern on the boxes. Isn’t it awesome?!

And this completes my story of how I was able to continue a special family tradition for my kids using a non-traditional color scheme. I bought a variety of Christmas chocolate candy and filled each box with 2 pieces–heavy on the Reeses Peanut Butter Cups and the new hot chocolate kisses.

My story isn’t over yet, however, as it was during the filling of the boxes that I discovered a few design flaws. First of all, the tabs on the boxes are very fragile, and opening each box takes some finesse. So, I’m not convinced these boxes will hold up beyond this year. Second of all, I discovered that hot glue doesn’t work well on chalkboard, and so a lot of the boxes came off. I ended up using a fast-drying epoxy glue which did the trick. Live and learn, as they say!

Okay, now my story is done. I hope all of you are enjoying this Christmas season, and, as always, remember:

“May the waves kiss your feet; the sand be your seat; and your friends out-number the stars”.